Not all termite are bad for homeowners. But you need to know when they are bad! 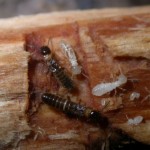 “Most of them are quite safe,” science teacher and conservationist Greg Smith told 891 ABC Adelaide‘s Weekends program.

“There are only really a handful that are dangerous to human structures.”

“The mound builders actually eat grass — so they are not a real problem at all,” Mr Smith said.

He said the mound-building termites were a vital part of the ecosystem.

“Some bird species eat termites and won’t breed at all without them,” Mr Smith said.

“We don’t destroy the mounds when we see them, we just take a section of it out and then cover it back up,” Mr Smith said.

The goanna is classified as vulnerable in South Australia by the environment department, with several areas now listing them as endangered.

“They are almost extinct in the [Adelaide] Hills,” Mr Smith said.

“The subterranean ones will travel underground for up to 200 metres, into a new food source, which may be your house,” Mr Smith said.

In suburbia he said the average residential block was about 10 metres wide, which would give a termite nest up to 20 houses in its range.

Mr Smith said people wanting to rid a home block of termites needed to be aware of the longevity of chemicals if used.

“Anything that can kill something is not going to do us any favours in the long run.”

“It might kill an insect in a few minutes, but I always worry about the long-term affects on ourselves.”

Mr Smith recommended home users check which type of termite nest they have discovered before attempting to destroy it.

If it was a breed that was a threat to buildings, he suggested owners check the contents and warnings of poisons before using them around homes.

“Just a short note to thank you and Bruce for your professional and prompt attention to our request for an inspection at Tura Beach and very comprehensive report. I appreciated the fact that Bruce phoned me and offered a further conversation if I wanted after reading the report. As it happens the report was so detailed that I felt that no further explanation was required.”

“Bruce and the team were professional from the start. Appreciated the time, effort and detail that Bruce took to carry out the inspections, also appreciated the ongoing communication. The report was very detailed. Would highly recommend Surety Property!!”

What Do Wall Cracks Mean In My house?